Over 2 million people in the United States suffer with some type of cartilage problem annually.

When 14-year-old Jack was diagnosed with osteochondritis dissecans, a painful knee condition, knee cartilage restoration provided the relief he needed. It also inspired his dad, Michael, to get the surgery he needed to treat his own knee pain.

Read on to learn how OrthoIndy has helped this father-son team get back in the gym without pain.

In 2016, Michael and his 14-year-old son Jack realized they would have more in common than being just father and son. Michael and Jack experienced similar knee pain that began to cause issues in their active lifestyles.

Jack was attending one of his weekly CrossFit sessions, where he rarely injured himself, when he started to slowly experience knee pain whenever he put a lot of weight on it. Even with rest, the pain would not ease up.

His knee pain made it difficult for him to walk upstairs, a simple part of his daily routine. “That was probably the biggest impact on my activity initially, besides not being able to do certain lifts at CrossFit,” Jack says.

“Osteochondritis dissecans is rare in the general population, but less so in a knee surgeon’s practice. For a variety of causes, a small area of bone dies in the knee. In the young, it can heal sometimes, while in other patients the bone does not heal and gradually the overlying cartilage is affected. Treatments are initially focused on healing but if that fails, the fragment is removed. Some patients are then asymptomatic, but others like Jack, experience activity related pain, at which point knee cartilage restoration is the next step,” Dr. Farr says.

Meanwhile, Jack’s father Michael was dealing with knee pain of his own. Previously, Michael had torn his lateral meniscus in the fall of 2011 when he was 60 seconds away from breaking 90 minutes in a half marathon and accomplishing his main goal.

After years of knee pain and Michael’s initial thought of “avoiding surgery like the plague,” he decided to have his first of two partial lateral meniscectomies surgeries because of his son’s success with knee cartilage restoration. In the winter of 2016, OrthoIndy sports medicine specialist Dr. Scott Lintner performed his surgery.

“The surgery was successful and I was quickly able to resume day to day activities and began to enjoy an active lifestyle once again with my family,” Michael says.

The road ahead was looking bright for Michael until he tore what was left of his meniscus. “I found myself back on the sidelines with knee pain and swelling. After learning about what my son was about to go through and the treatment options that Dr. Farr offered, I quickly made my first appointment,” he says.

As an emergency physician, Michael had a better than average knowledge of knee injuries and the current available treatment options.

“Dr. Farr confidently offered treatments for my knee that I didn’t even know existed,” Michael shared. “So you can understand my surprise when Dr. Farr recommended a complete lateral meniscus transplant to replace my missing meniscus, as well as an osteochondral allograft to my secondarily damaged articular cartilage (a result of loss of the meniscus).” Michael’s son Jack, who had the knee cartilage restoration, would also need an osteochondral allograft.

“Meniscal transplant is straightforward to explain, the absent meniscus is replaced with a donor meniscus. On the other hand, osteochondral allograft is a term rarely heard outside a knee surgeon’s office. ‘Osteo’ means bone and ‘chondral’ refers to the overlying articular cartilage, the white, glistening, firm rubber-like substance covering all the bones in a joint. Combining the terms means the donor cartilage remains attached to the underlying bone,” Dr. Farr says.

“During surgery, a ‘shallow socket’ is created at the site of the cartilage deficiency, a plug of cartilage with attached underlying bone is harvested from a donor and transplanted into the socket recreating the smooth cartilage surface.”

After extensive research, Michael decided that there were no other options than to have the surgery with Dr. Farr. “I found out that not only is this surgery infrequently performed, but that Dr. Farr is one of the pioneers and world leading experts in this type of joint restoration surgery as well as knee cartilage restoration, which my son had,” Michael says.

Michael and his son had their transplants within a week of each other in spring 2017. Dr. Farr performed both of their surgeries at OrthoIndy Hospital. “It was interesting to say the least, recovering from surgery with my son,” Michael says.

“I loved being able to schedule an appointment at the same time as my dad to learn about knee cartilage restoration because we only had our surgeries a couple days apart,” Jack says.

Michael’s recovery has been speedy, and he has started to return to cycling. He can already tell that his knee is more stable and less painful than ever before.

Likewise, Jack has already returned to CrossFit and weightlifting since his knee cartilage restoration surgery. He recently went to his six-week check-up and Dr. Farr told him, “everything is going as it should be.”

Jack’s next adventure for the road ahead after knee cartilage restoration is to squat and run a mile. He hopes he doesn’t have to worry about his knee in the future since he has not been able to run normally in about two years. Michael hopes to compete in another Ironman triathlon.

After knee surgery, Michael and Jack advise anyone who thinks that knee pain is part of getting old to not assume that is the case.

“Dr. Farr and the other orthopedic surgeons at OrthoIndy are second to none. If my son and I had not made the initial consultation visit with Dr. Farr, we would both still to this day be experiencing chronic knee pain with a dramatically altered and more sedentary lifestyle,” Michael says.

Michael and Jack are great examples of what it means to never lose hope. With their hard work and dedication, they are now able to excel and grow as athletes.

Your well-being is important to us. If you have knee pain and are considering knee replacement surgery, schedule an appointment with one of our orthopedic specialists to review your options. 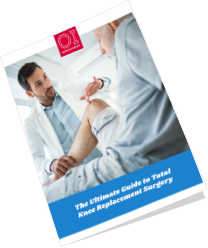 Take control of your knee pain, learn about treatment options, and find out if surgery might be able to help you get back to normal.