OrthoIndy spine doctors explain what your curve means and if you have a mild, moderate or severe scoliosis curve.

Although 18-year-old Sydney Landes was diagnosed with scoliosis at an early age, she never let scoliosis pain hold her back.

For Sydney, dirt car racing is a normal weekend experience. The full-size, dirt-modified race cars allow the driver to speed around an oval dirt or clay track in a matter of seconds.

However, by the time she was 16 years old, her scoliosis had progressed. Read on to learn how spinal fusion surgery gave Sydney relief from scoliosis pain and helped her live a normal life—on and off the track.

“At the time of switching doctors, my curve was only at 35 degrees. We were mainly going for my mom, whose curve at the time was a lot worse than mine,” Sydney says. “About a year after seeing Dr. Schwartz, he told me at one of my checkups that my scoliosis had progressed to over 50 degrees within a matter of six months.”

Dr. Schwartz recommended Sydney have a spinal fusion surgery before the curve and scoliosis pain got any worse. During a spinal fusion, the affected vertebrae is fused together so that they heal as a single, solid bone.

Similar to how a broken bone heals, the bones will then grow together. The size of the fusion depends on the severity of the curve.

Sydney’s parents, Mick and Leigh Ann, were shocked her spine had progressed that much and they couldn’t believe surgery would be the next step. For Sydney, the shock also included a question of how surgery would impact her racing hobby.

“Sydney needed surgery to prevent her spinal curve from getting worse,” Dr. Schwartz says. “She was concerned that she wouldn’t be able to race again. I reassured her that I have patients who after scoliosis surgery are back to gymnastics, cheering and lacrosse and I thought racing would not be a problem.”

Sydney and her parents decided surgery was the best option to relieve her scoliosis pain.

“OrthoIndy was amazing, not only for me but also for my entire family. I could not have been any more pleased with the staff and hospital,” Sydney says.

“My nurses were exceptional and Dr. Schwartz made me feel very confident about the surgery and it made me feel like I was in good hands. I was as comfortable as I could have been going into such a life-changing surgery. I couldn’t have asked for a better surgeon.“

LEARN MORE ABOUT SCOLIOSIS BACK SURGERY

After a spinal fusion, patients are generally feeling better two to four weeks after surgery. After six to twelve weeks, most patients are able to return to all their normal activities.

For Sydney, it’s been almost three years since her surgical treatment for scoliosis.

“I have been racing cars since I was 7-years-old. I love it just as much now as I did than when I started,” Sydney says. “I thought that when I was told I was going to have to have surgery that it would interfere with racing. Nine months after scoliosis surgery I was back in my racecar doing what I love. The surgery has not held me back from racing since.”

Sydney’s parents also feel like they made the right choice to encourage their daughter to undergo surgery for her scoliosis pain.

“Our experience at OrthoIndy was great,” Leigh Ann says. “As parents, we were scared to death to see our daughter go through such a life-changing surgery. During surgery it was the longest six hours of our life. The recovery was very painful to watch her go through, but the outcome was worth it in the long run. We are happy that she went through it at her age at the time.”

Sydney plans to start college in Fall 2018 and continue racing while she’s there. She’s excited to enjoy a life without scoliosis pain.

“I would just like to thank OrthoIndy, Dr. Schwartz and his team for everything they did and have done to make my experience the best they possibly could have,” Sydney says. “I definitely recommend Dr. Schwartz and OrthoIndy to anyone that has scoliosis pain or is in need of any other orthopedic treatment.” 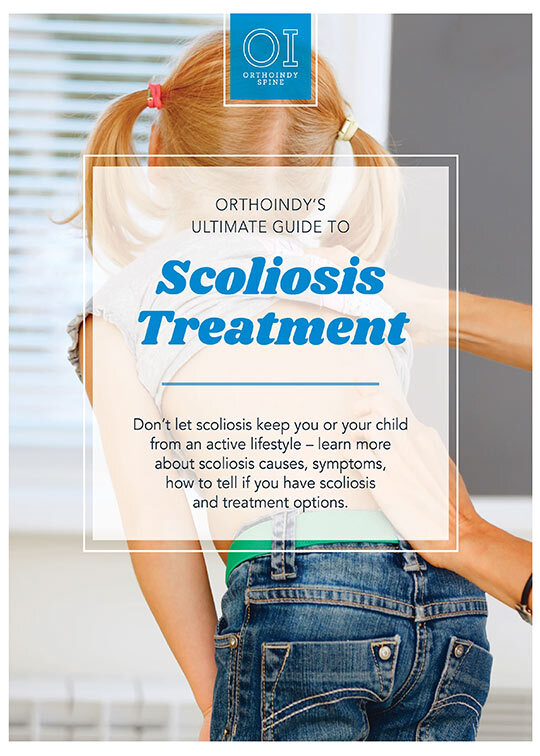